Anibal Troilo and Astor Piazzolla were from very different generations and also different from adventures of origin.
Very distant from each other.
While “Pichuco" grew up in Abasto, Astor practically lived his childhood in the tough neighborhoods of Manhattan (New York, City) and Mar del Plata (Argentina).
Troilo was born in 1914 and Piazzolla in 1921.

They met in 1939. The man from Mar del Plata had decided to settle in Buenos Aires a year earlier trying to discover if what he had learned with the bandoneon that his father gave him, served him to make a living from music in the strange, for him, Buenos Aires, which at that moment he woke up from his tango lethargy and one of the most fruitful and brilliant stages of popular song began to take shape.
Troilo debuted with his first orchestra at the Marabú (now run by a great friend of mine), on July 1, 1937. At the time of the meeting, the orchestra was playing at the Café Germinal on Corrientes Street, between Suipacha and Carlos Pellegrini . They played from 3pm to 9pm, and the young Piazzolla went every afternoon to listen to it and with his great ear he already knew the repertoire and he had even made friends with Huguito Baralis, the violinist. And he told him how much he wanted to join the orchestra. 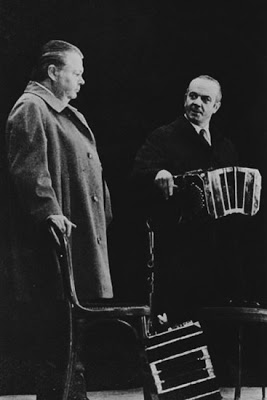 "I know the repertoire by heart and I am able to play it without reading any sheet music, I swear", Astor said.
"No, rule it out," Baralis replied.
"You're too kid for what Troilo wants. I know him well, he looks for experienced people next to him and he wouldn't take any chances."
But one afternoon Astor noticed that there was some problem on stage and he pressed Baralis, who confirmed that Toto Rodríguez had gotten sick and they had no way to cover his absence in the bandoneon line. And then Piazzolita told him: "Speak to Troilo, I am encouraged to replace him." And he ran out to find his bandoneon at the nearby boarding house on Sarmiento street, where he lived.
Upon returning to the Germinal, Pichuco faced him challenging him:
"So you are the kid who knows all my repertoire ... Well, let's see, just start playing!"
And to everyone's astonishment he took off with the solo repertoire. Even in the tango Abandono, by Maffia, he played the variation with his left hand. Orlando Goñi, the great pianist looked at him in amazement, exclaiming: "and this one... where did he come from!"
Troilo in his particular lexicon, with those indirect forms, said to him: "Kid, we act with blue outfit, you know …"